"Like a small state capitol" was the comment made by an eastern visitor, ironic since the same architect, C.E. Belle, also designed the South Dakota State Capitol building in Pierre built in 1909. Every room, as well as the halls, were furnished with artistic brass electric light fixtures to which gas lamps can be added at any time. The floors throughout were composed of beautiful mosaic work and Greek fret borders near the walls. All of the woodwork and furnishings Judge's Benchwere of the very best quality of golden oak.

On the ground floor of the new courthouse was located the sheriff's office, the county judge's courtroom and the superintendent of schools office, which had a large adjacent room for the examination of candidates for teacher's certificates. A large portion of the space on the ground floor was taken up by storage vaults, which extended down from the offices on the second floor. The vaults were reached from the offices above by winding stairways with iron railings. 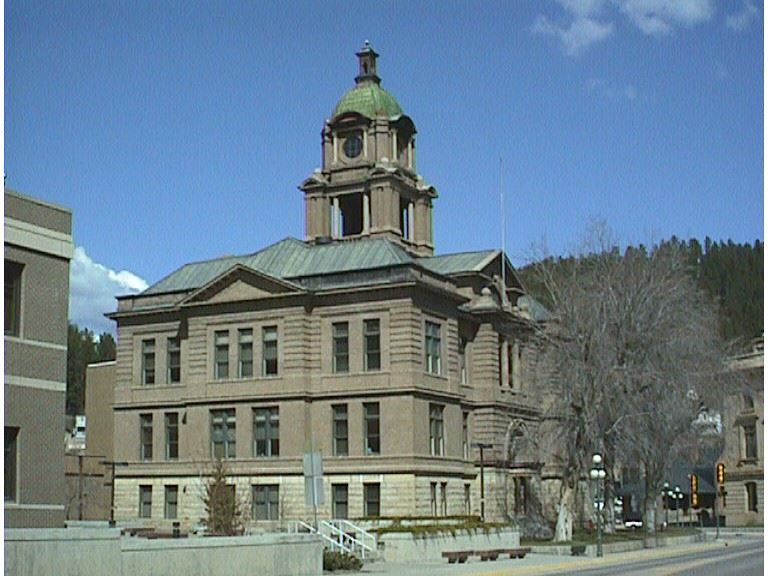 The second floor was occupied by the Clerk of Courts, the Register of Deeds, the Auditor, the Treasurer and the Commissioner's meeting room.

The Commissioner's room contained four murals painted by EA. Soderberg, chief artist of the O.J.Oyen Company, at the company's headquarters in LaCrosse, Wisconsin, and then shipped here. One of the murals reflected the extraordinary combination of bridges in Lead, where the railroad lines all moved by different varieties of power, and superimposed one above the other. An electric below, above it a stream, and high in the air a line operated by compressed air.

Another mural reflected an old prospector, his hand shading his eyes and his gaze bent on a far-off mountain peak. The third mural depicted a bull train winding its way slowly across the prairie approaching a wooded spot that promises refreshment and rest. In the distance is another similar train Jury Boxof twenty bulls still out of the torrid sunshine. The final mural was of a party of cowboys hard at work in a herd of cattle with their broncos at full tilt and their lariats whirling in the air.

The second floor also featured an ornate iron railing, backed by golden oak, surrounding the opening of the cupola area.

The third floor housed the entire legal and judicial part of the county government. Here were the

In the courtroom, the judge's bench was backed by a graceful niche of golden oak.

On the ceiling was painted a large allegorical figure entitled "Justice and Mechanics" painted directly on the ceiling by EA. Soderberg. The jury room was decorated with hand-painted frieze around the room showing a plow scene.

The series of four paintings in the slanting roof of the cupola represented placer miners of Cupola Paintingthe early days in act of panning gold, a view of the great Homestake Gold Mine showing the highest development of the mining industry, the famous Spearfish falls located in Spearfish canyon, and a view of the town of Spearfish. They were also painted by Soderberg at the Wisconsin headquarters and shipped to Deadwood. Centered at the top of the cupola is a beautiful colored stained glass window.